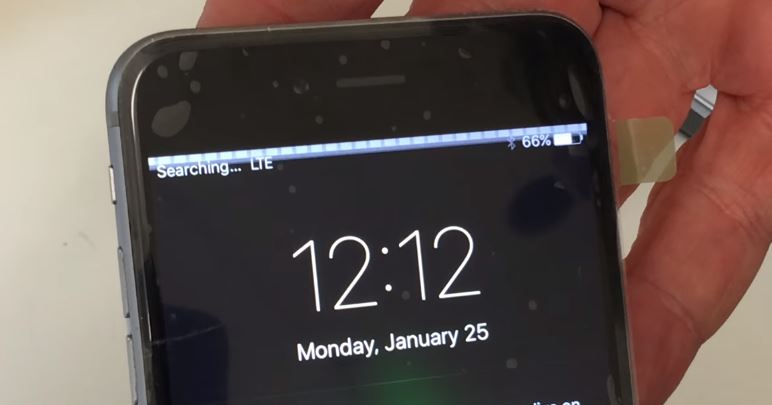 The Long-term Consequences of Bendgate: Apple continues to Pull the Wool over the Consumer’s Eyes

Do you have an iPhone 6/6+ that’s having a problem detecting your touch or showing a flickering gray bar at the top of the screen? Or did it completely stop detecting touch? Did that happen after 12 months of use? So you search for an answer on line hoping you will find a fix for it? Maybe that is why you landed on this page?

There are many threads online regarding this problem, which affects thousands of iPhone 6/6+ users. There is even a post here where someone reports that an Apple Store Manager said, “This is a well known issue and we have people coming in all day long with this problem.” And yet, they offer no real solution other than buying a new phone or pay $299/$329 to swap with a refurbished phone if your phone is out of warranty. So what is going on?

The root of the problem is the touch Controller on the logic board.

Remember #Bendgate? When the iPhone 6/6+ first came out and users around the world were posting about how easy the iPhone 6/6+ bends, showing pictures of how the phone was curved in the exact contour of your butt after pulling the phone out of back pockets?That little problem was quickly addressed by Apple’s PR engine.

But the fact remains. compared to earlier iPhone models, the iPhone 6/6+ housing DOES BEND easily. Its slim form factor, larger surface and bendy housing puts pressure on the logic board inside of the phone that no other iPhone model has had to deal with.

On a relatively simple circuit board this would be no big deal. Basic chips are securely anchored to the board with metal feet soldered to large pads, and it can probably survive a drop of 30′. We have seen a iPhone 5 come in dropped from a high rise crane (which is about 65′), and even if the screen is completely destroyed, the phone still works!

But as the phone manufacturers design the phone thinner and lighter, yet demand high-powered functionality with a huge battery, the logic board now has to have many BGA chips to accommodate all that.

That is a fine way to pack in more functionality, but what about durability? This is a major concern, and it’s solution is securing the biggest BGA chips to the board with an electronics superglue of sorts­—underfill. The underfill is injected as a liquid under the chip and cured to rock hard consistency, which cushions and supports the solder balls.

In the iPhone 5 and 5c, most of the BGA chipsets on the board are seated just about same way as iPhone 6/6+ but it didn’t have as much problem as many iPhone 6+ / 6 uses are having. That is because of size factor, so it was carried forward in the iPhone 6/6+ board design.

I don’t think they knew or anyone could foresee this could happen as their relative position on the board (seated on a span of board like a swinging bridge between two anchoring screws), and the inherent ‘bendiness’ of the slim iPhone 6/6+ have combined to create the problem we are seeing now. (This was likely done to reduce the cost of manufacturing the phone.)

So what are your options? Have the chips replaced, not just “reflowed.”

Dozens of great cell phone repair shops around the world have been quietly solving this problem for months by replacing the touch ICs on the board. Find a shop that will replace, not just “reflow” the touch ICs. Reflowing, or simply heating up, the existing chips in the hopes of shoring up the failed bond doesn’t solve the problem for very long. When a pad under a chip is oxidized, molten solder will not be able to stick to it very well, and the solution will only be temporary. Removing the old touch ICs gives the micro-solderer a chance to clear any oxidation on the underlying pads and ensure a solid bond between the board and new chip. Since there are two touch ICs (cumulus chip and meson chip), both should be replaced. If you replace just one, the problem could be phantom-solved due to the side effect of reflowing the causative IC during replacement of the non-causative IC in that device.

The cost of touch IC replacement service is about the same as a screen replacement, and it will extend the life of your device significantly.

But Apple doesn’t want you to know that.

If you ask Apple, they will tell you that the only solution for an out-of-warranty iPhone 6/6+ is to pay the $299/$349 out of warranty replacement fee and exchange your phone for a new one. Well, news-to-you.

And this is the problem. When you fork over the money and open that pristine white box, the phone inside is not new. It is refurbished. Let’s think about that for a minute. There is nothing wrong with refurbishing an iPhone—in fact it is a great thing to do. But, HOW was that phone refurbished?

We know that the iPhone 6/6+ is susceptible to touch IC disease with prolonged use, and that this is exacerbated by any drop. This means that the iPhone 6/6+ board, at refurbishing, needs to have the touch ICs replaced in order to return the board to a like-new condition. If not, then the “new” iPhone 6/6+ logic board nestled below the new screen is particularly prone to subsequent failure of the touch ICs if its prior life history included a bad drop.

We don’t know the details of the Apple refurbishing process, but let’s make some logical guesses. What happens when you drop your iPhone and the glass is shattered but the frame is intact? If you go to the Apple Store, you’ll get an in-house screen replacement for $109 and go on about your way. But if your phone was in a particularly bad tumble where the frame itself is damaged or bent, you won’t qualify for the straight-up Apple screen replacement. Frame-damaged phones are excluded, and your only option is to hand them your phone, pay the Out of Warranty swap fee, and leave with a refurbished phone.

What, then, happens to the phone you turned in? It will go back to the Apple Depot for refurbishing. Once there, the evidence suggests that the “good” board is harvested from the phone, and installed in a new frame with a new screen and battery and then sent back to the Apple Store to be handed to the next guy paying for an OOW replacement.

And what do we see from the experiences of those that did take advantage of the out of warranty swap and walked out with a refurbished iPhone 6/6+? From the Apple Support Community website we see plentyofpeople commenting that their “new” phones soon succumbed to the same exact problem.

Is this anecdotal? We don’t know. But we do know that there is an intentional suppression of information within the Apple Support Community (ASC) forum about the underlying cause of the iPhone 6/6+ frequently coming down with touch IC disease and becoming unresponsive to touch.